Stop wasting time and money on bad ideas. Empower your organization with the scientific method to run experiments at scale and deliver better products to market.

DOWNLOAD COURSE OUTLINE
Thank you! You will be contacted for the details shortly.
Oops! Something went wrong while submitting the form.
[DOWNLOAD FREE EBOOK] THE WEB3 VALUE CHAIN: 50 WEB3 USE CASES FOR ORGANIZATIONS OLD AND NEW

A lot of theatre goes down in London town.

Whether it’s The Lion King at the Lyceum, Wicked at The Apollo, or Hamilton at Victoria Palace, it’s not hard to find someone breaking a leg somewhere in the city.

The office, however, should not be one of those places.

Yet, when it comes to putting out new products or services, many organisations are performing innovation theatre. Putting on a huge production, but, you know, not actually producing anything worthwhile.

Instead of making real progress, they go round the houses, over and over, like Hamilton at Silverstone.

Well, it’s time for the play-acting to jog on!

Doing so is more important than ever if London-based enterprises are to remain competitive.

We help organizations get past theatre and towards a culture that lives and breathes lean startup principles.

We’ve worked with companies such as Simmons and Simmons, Microsoft, Clifford Chance, as well as others around the world, and can help you move, learn and succeed faster than ever before.

We have multi-disciplinary talent located all over Europe, as well as globally, and they’re ready to help you adopt the principles that have helped the likes of Airbnb, Netflix and Spotify run laps around the competition.

In today’s fast changing and uncertain business landscape, the organizations that learn the fastest - and make better decisions as a result - will win.
‍
While many organizations find themselves flush with employee ideas, they have no meaningful way to take those ideas further, short of over-investing in full-blown product development, which often turns out to be a costly mistake.
‍
Organizations of all sizes are embracing the lean startup to help them take ideas further, and place many small bets, instead of few large ones.
‍
This helps organizations improve their likelihood of finding product market fit for new product and service ideas, and avoid wasting time and money on the wrong ideas, or worse still, doing anything at all.
‍
The lean startup supports quickly, cheaply and effectively testing assumptions underpinning an idea.
It’s about designing experiments to observe what customers will do in the real world, not just what they say.
‍
It empowers managers to make better investment decisions, supported not by what market research reports, group-think, politics or the highest paid person say, but by what customer behaviour tells us.
‍
We’ve worked with some of the world’s largest brands to deliver lean startup training and empower organisations to build, measure and learn much faster than they ever have before - something key to not only thriving, but also surviving in the 21st Century.

WHO IS IT FOR?

Design thinking is not just for product teams. It can be used by people from across your organization to solve whatever problems they are faced with.

Our lean startup training can be delivered face to face, online or via a blended delivery model and can be customised to your organization’s unique requirements.
‍
Participants are encouraged to bring real-world projects to the training and apply concepts learned in real-time to generate measurable business outcomes.

- More than 70% of IT projects fail
- More than 80% of new ideas at large companies fail
- More than 95% of startups fail
‍
Why?
Because they all race ahead and develop products and features that nobody wants or wants bad enough to pay what’s required to generate sustainable growth.
‍
A startup is just a temporary organisation searching for product market fit. 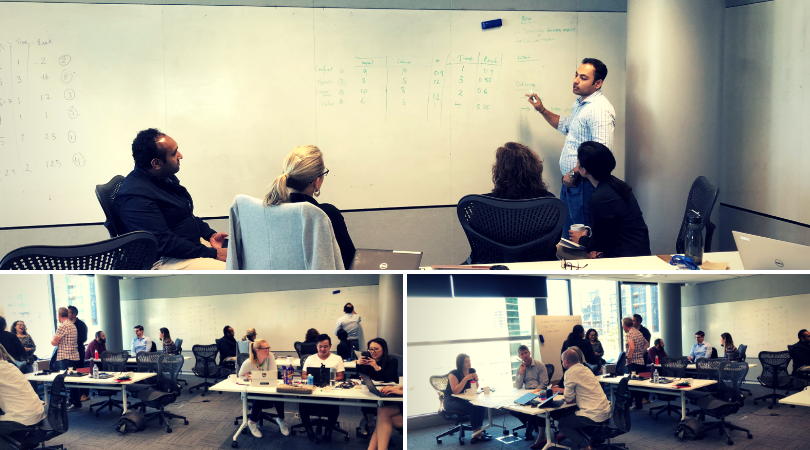 As such, when a corporate innovation team is searching for product market fit for a new concept they are effectively a startup and the same rules apply. Therefore, they need to embrace the mindset, methods and tools that a startup uses to find product market fit, at least in the early stages of an innovation project, to maximise their likelihood of success.
‍
The lean startup provides a framework to quickly, cheaply and effectively test assumptions underpinning an idea - the problem, the solution, the features, target customer segments, distribution channels, marketing channels, revenue models and more - which allows managers to make better investment decisions supported not by what market research reports prepared by research houses tell us (usually an indicator of the past) but what customer behaviour tells us. This goes far beyond focus groups which fail because test cases are usually (a) paid to be there, (b) influenced by the vocal majority in the room and (c) not actually asked to pay for something.
‍
Being 1.5X or 2X better is no longer enough. There are so many factors influencing buyer behaviour including customer experience, switching costs, social proof, price, quality, support, brand, noise and more importantly whether your product is 10X better than what they’re currently using or how they’re currently solving a problem. In a world full of noise and an endless stream of marketing messages, the only way you will stand out and get people’s attention to the point where they are compelled to act is by being 10X better.

The effects of the lean startup bootcamp that Sportsbet employees took part in are still being felt over a year later. Bootcamp participants are questioning things, running lean experiments where they’re not sure of the answers and moving faster to get better results.

This ebook provides you with not only an overview of the lean startup methodology, but how to apply it at a large organization.

"The legacy lives on from the lean startup training our innovation team did with Collective Campus. They now question everything, see things through a different lens and have started to spread that approach throughout the business."

"Steve is an engaging presenter with a wealth of knowledge and experience in the Lean Startup method."

Empower your people to run fast experiments with the Lean Startup.
DOWNLOAD COURSE OUTLINE
Thank you! You will be contacted for the details shortly.
Oops! Something went wrong while submitting the form.

The benefits for your organisation include:

WHY LEARN WITH US?

Steve Glaveski is the founder and CEO of Collective Campus, and his mission is to unlock the latent potential of people to create impact in the world and lead more fulfilling lives.He co-founded children’s entrepreneurship program, Lemonade Stand, is the author of several books, including Wiley book Employee to Entrepreneur: How To Earn Your Freedom and Do Work That Matters, is a contributor to the Harvard Business Review and hosts the award-winning Future Squared podcast. He previously worked for the likes of EY, KPMG, Westpac and Macquarie Bank.