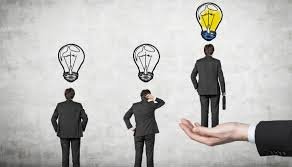 Large organisations are beginning to invest in innovation - usually this takes the form of idea contests, hackathons, incubation programs and intrapreneur programs.

However, identifying the right fit employees can be a challenge.

While the idea of being part of an innovation program might sound sexy to almost everybody initially, it requires a particular type of person to generate the most value out of such a program and stay the course. I'm talking about the intrapreneur - an entrepreneurial thinker and doer, within a large organsiation.

So how does one go about finding such talent? I've identified five ways that I've seen work successfully below.

If you’re on the lookout for entrepreneurs within your organisation, you need to identify people who not only find the idea of entrepreneurship compelling, but also characterise entrepreneurial behaviours and spirit. For more on what these behaviours are click here.

A funnel approach, often used by marketing and sales, can be applied to finding suitable entrepreneurial talent by evaluating their engagement in an innovating vetting campaign.

Step 1 - Place posters around the office promoting a new mysterious program with limited but innovation suggesting copy - think “Gamechangers Wanted” or something to that effect. “Email

This will pique the interest of a pool of people interested in both doing things above and beyond the realm of their existing role and people who seek change rather than run from it.

Step 2 - Send employees who expressed interest a short activity to complete This could take the form of a survey, an open-ended questionnaire and so on. The activity should take long enough (say 15-30 minutes) to complete in order to foster engagement by those not only expressing interest to go above and beyond, but those that actually spend some time demonstrating this behaviour.

Step 3 - Interview people who completed the survey and assess them against criteria, found here, in order to bring the number down to your desired number of participants.

Psychometric testing can help to identify personality traits that are synonymous with entrepreneurship. The Psychometric Project, a UK-based open source psychometric resource, evaluates people based on the following attributes:

Check out this 50 item test to test your own entrepreneurial nous.

Entrepreneurs are a curious, inquisitive bunch and subconsciously connect the dots between broad and unrelated interests - this is often referred to as ‘associational thinking’. As such, most entrepreneurs aren’t content with the status quo when it comes to news sources, books, music, television, film, art and so on.

It only takes a few seconds to identify candidates online, privacy settings permitting, and ‘stalk’ their interests.

Do they seem to have a penchant for top 40 music only and whatever is trending on free to air reality television or have they demonstrated an interest in not so easily accessible media and opinions? Do they follow influencers of note on LinkedIn or is their profile blank and does their Twitter account suggest they spend more time following the Kardashians than they do the Elon Musks of the world? If so, they are more likely to not take things on face value, challenge the status quo and go hunting in search of answers to problems that most people don’t acknowledge.

If I was evaluating somebody’s fit for an innovation project purely based on musical taste, I’d take an Iron Maiden fan over a Taylor Swift fan any day...no offence to the Taylor Swift fans reading this!

This is particularly true of Gen Y employees. As the name suggests, identify existing employees who have embarked upon or are currently working on a startup outside of business hours. This is perhaps one of the most demonstrable and valuable indicators you can find of entrepreneurial thinking and doing.

I know these guys well...I used to be one.

At a number of previous employers, I often put decks together outlining problems with existing processes or systems and what opportunities existed for improvement. Unfortunately, these flawed processes weren’t limited to the way that decision makers got incentivised so the buck often stopped there.

However, truly entrepreneurial people will find it difficult to hold back and accept things as they are - they will either grow disgruntled and unproductive, leave to join more progressive companies or start their own.

It should be easy to identify these people if you’re a middle manager or decision maker in a company - they tend to be the most vocal about not adhering to “the way things have always been done around here” mantra and tend not to shy away from change management efforts.

To find out how I can help you identify intrapreneurs and run innovation programs at your company, get in touch.