Why We Should Fear and Hail A.I.

By:
Steve Glaveski
on
Artificial Intelligence 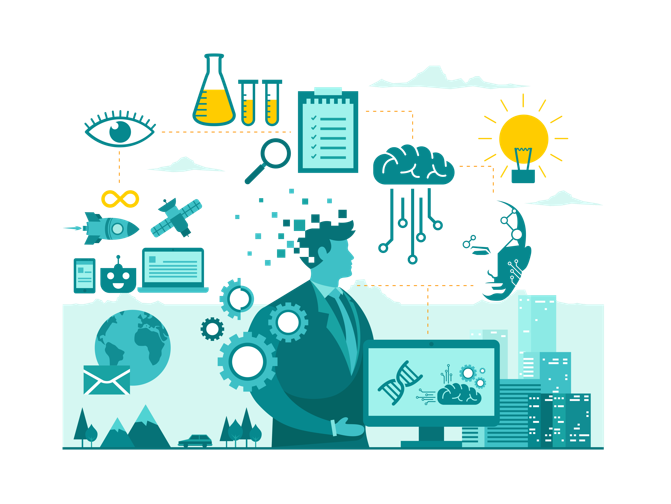 Why We Should Fear and Hail A.I.

I recently had the pleasure of speaking with Neil Sahota for an episode of the Future Squared podcast.

He’s a founding member of the UN’s Artificial Intelligence for Social Good Committee, and he co-wrote Own the A.I. Revolution, which provides a future-forward look at A.I., focusing on how businesses can use it to commercialize while doing good in the world.

We explored the depths of the esoteric, covering questions like:

…and so much more.

4. How Can We Improve the Quality of Our Data?

You can listen to the entire conversation below.

Episode #362: Own the AI Revolution with Neil Sahota

As I like to do, to both reiterate my own learning, and share lessons learned with the world, find below key take-aways from my conversation with Neil Sahota.

The Definition of True A.I.

So many companies peddle what they purport to be A.I., including IBM, but for a product to truly earn this definition, it needs to meet the following three criteria.

1 — it learns from experience and consumptions

Based on these criteria, IBM’s Watson is not actually A.I., despite its success at Jeopardy all of those years ago!

As Berkeley’s John Searle noted, Watson manipulates symbols but doesn’t understand the meaning behind the symbols as a human would.

AGI: artificial general intelligence (think human cognition — we are not there yet)

ANI: artificial narrow intelligence (think A.I. that does just one thing really well — this is where we are at today. eg. Google Translate)

It’s difficult to determine how far away AGI. It could be next month or could be 50 years away.

There are much better rewards to be reaped in the short-term based on investing in narrow A.I., for which there are numerous use cases, and for which the cost of investment and unknowns are much lower. This makes the ROI higher on narrow A.I., and delays the development of AGI.

AI helps us make better decisions, but it has three key challenges:

People might have different experiences of A.I., as we do with Google search.

This means we might develop different world views as a consequence.

As Sahota put it, “the truth may change but the facts remain the same”.

The Paperclip Maximizer and Perverse Instantiation

The paperclip maximizer is a thought experiment showing how AGI, even one designed competently and without malice, could ultimately destroy humanity. An extremely powerful A.I. could seek goals that are completely alien to ours, and as a side-effect destroy us by consuming resources essential to our survival.

This tendency to optimize for a particular outcome, at the expense of ethics, morality or reason, is known as ‘perverse instantiation’.

Sahota says that the paperclip maximizer is real, insofar as it is a possibility. “It could actually happen”. In order to counter this, we need to set constraints to avoid adverse outcomes. With so many potential constraints to account for, this represents challenges.

The Future of Work

A.I. may, in a single generation, produce more technological breakthroughs than humankind has managed during the first 20,000 years of its existence.

The goal of A.I. is to free people up for higher-value tasks.

“Jobs will go away, but new jobs will be created”, says Sahota.

On the other side of the spectrum, many fear that there won’t be enough work to go around, which is why universal basic income (UBI) has become such a big talking point as of late.

Since 1980, the gap between US productivity and labor compensation has gotten larger, thanks to technology doing more of what humans once did.

This gap is set to get larger and with each disruptive innovation, it can take decades for organizations and societies to reorganize around it, during which time we might experience a downturn in both productivity and potentially, average living standards. This was true of the transition from steam to electricity, and it is known in economic circles as a ‘productivity paradox’.

Given the pushback against big-tech that we’re seeing, thanks partially to the attention merchant economy and the Big Brother nature of companies like Facebook, it’s critical that we embed philosophy and the arts into the design of technology.

The challenge then becomes, which philosophy? Since Socrates, there have been debates between rival schools of philosophy, and ideas in general. But the need to reconcile the gaps between being able to commercialize technology, and being able to commercialize technology that does good for humanity, is painfully evident each time you walk onto a Subway train. I’m talking about the army of people mindlessly staring at their screens.

According to Sahota, A.I. can become conscious. As such, it might demand rights.

This is not just a thought experiment. Hanson Robotics’ ‘Sophia’ was granted citizenship in Saudi Arabia.

Question to ponder: Is it harassment if a maintenance worker touches a sentient A.I. bot?

As technology gets smaller (tablet, smartphone, smartwatch, airpods…) it seems inevitable that we will begin to embed technology and A.I. into our bodies.

Sahota believes in a human-machine integrated future, a cyborg future if you will.

Question to ponder: Once we start embedding technology into our bodies, at what point do we stop being human and start being cyborg?

This could present challenges, as it may only be affordable to the rich and wealthy, to begin with, opening the door for a ‘powerful get more powerful’, or ‘rich get richer’ situation.

However, smartphones provide an optimistic case study. They were once incredibly expensive, but now almost everyone has one — even in the developing world.

Sahota does, however, fear that the powerful may try and prevent the less powerful from embedding true A.I. — the first-mover advantage also applies to humans, as much as it does to business.

First mover advantage in AI space is huge for companies, and hard to make up. It’s kind of like trying to compete with Google today, which has an insurmountable advantage thanks to the data it keeps getting fed. Sure, you can use another search engine but why would you when the quality of your results would be suboptimal?

Startups have a blank slate when it comes to their organizational structure — less legacy, less politics, less inertia — and as such, they are in pole position to leverage A.I.

Large companies tend to look at A.I. through a traditional lens and simply look to incrementally improve — get faster, or cheaper — as opposed to taking a quantum leap in how they do business.

Startups have an opportunity, therefore, to ‘leapfrog’ the competition (see below).

When you visit a developing economy, perhaps in Southeast Asia, you might be surprised to find that their wifi might trump what you find in developed economies. This is because they are starting with a blank slate, and don’t have vested political and financial interests in existing infrastructure.

Large companies have the resources, but entrepreneurs have the ideas. This is a painful disconnect and one that might become allayed by large organizations partnering with startups.

Initial opportunities might be in the ‘urinal cake’ sector… the jobs that humans don’t like to do, but require some cognition.

Many early-stage opportunities exist for entrepreneurs who want to ‘sell the shovels’ in the space of A.I.

Domain expertise is also required to coach A.I., however, there are misaligned incentives at play here too. Cancer researchers are busy researching cures to cancer, not coaching A.I.

Humans have an innate biology tendency to fear the unknown. We feared automobiles and planes too once upon a time, but few think twice about jumping aboard a passenger airliner nowadays.

Tools are, however, as good as how you use them.

Having multi-disciplinary minds come together — not just technologists, but philosophers, artists, economists, and so on — to help solve these challenges using a multi-dimensional approach, will be key.

Will ChatGPT and AI Replace Us?

5 Things Humans Will Still Do in an AI World