6 of the Worst New Product Failures

By:
Shay Namdarian
on
Innovation 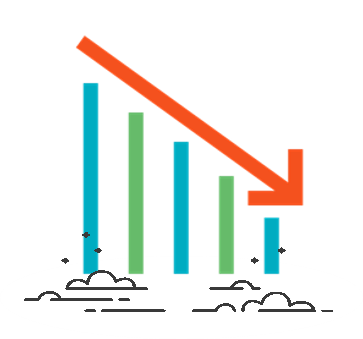 6 of the Worst New Product Failures

Fear of failure is often referred to as the number one enemy of creativity. This is fair enough as well, given it’s one of the main reasons why individuals and organisations struggle to innovate.

Failure should be encouraged as long as it happens quickly and cheaply. Oh yeah and there is learning that comes from it that isn’t swept under the rug!

Here are some of the worst new product failures from some of the most prominent brands in the world.

In 2011, Netflix’s streaming service started making strides and the company was also looking to continue making revenue through their DVD-by-mail offering. They decided to launch a stand alone website called ‘Qwikster’ which was essentially a rebrand of their DVD-by-mail service. The idea to split the two services into different brands (and websites) angered many customers and after about a month, ‘Qwikster’ was no more!

The Airboard attempted to be the iPad before the iPad even existed. However, Sony didn’t do a great job of it. The Sony Airboard was launched in 2004 and had some pretty impressive features for its generation. These features included internet access and the ability to stream TV wirelessly. Unfortunately, the price tag of approximately $1,300 did not attract many customers. The Sony Airboard was discontinued only 4 years after launch.

All the way back in 1995, Nintendo tried its hand at Virtual Reality. The Virtual Boy aimed to fill the void between the release of the Super Nintendo and the Nintendo 64. The results of the venture were not as Nintendo had hoped or expected and in early 1996 all game development on the system was suspended. Why did it fail? Some reasons cited were its high price, lack of portability and health concerns.

Another product that might have been a little before its time, the Google Glass did not last as long as Google had anticipated. Released in 2013, the Google Glass struggled for many reasons including its high price and issues around privacy. The wearable device just did not connect with customers. Perhaps it was just ahead of its time as augmented reality headsets take hold in the mainstream? With that, Google Glass has just come back from the dead with an enterprise offering.

Many wouldn't know it but Apple actually ventured into the world of game consoles. Their game console tried to do a bit too much; games, educational applications and web browsing. Unfortunately for Apple, it was discontinued within one year after selling only 42,000 units (RRP $600). To help put this into perspective, the Nintendo 64 sold about 500,000 units in the first three days after it was launched.

There was a lot of hype around the Facebook Phone before it was even launched. Partnering with HTC, the phone had a focus on the Facebook Home application. The end of the phone came quickly and dramatically with the price slashed to 99 cents, until there were no more phones to sell. Similarly, Amazon’s Fire Phone was a monumental failure, selling only 35,000 units were sold in the first 20 days after release, taking a US$170M hit with over US$83M worth of phones going unsold. AT&T also slashed the price of the Fire Phone from $179 to 99 cents.

“If we’re not making mistakes, we’re not trying hard enough.”

Even the most successful companies encounter failure when creating new products or services.

Jeff Bezos says “I’ve made billions of dollars worth of failures” and that “innovation and failure are inseparable twins” on the company’s way to becoming the first trillion dollar company.