Thanks! I have received your form submission, I'll get back to you shortly!
Oops! Something went wrong while submitting the form

By:
Steve Glaveski
on
Culture 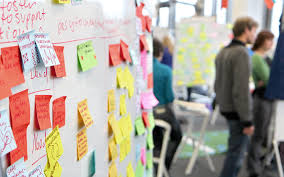 Design thinking has become such a hot topic amongst L&D and innovation teams at large companies that one would think executives see it as their silver bullet solution to their innovation woes (that, or it’s a way for them to be seen to be investing in innovation and providing a creative outlet for their millennial staffers).

Whatever the case, over 80% of new product launches at large companies fail and it’s because, as Michael Dell famously put it, “ideas are a commodity, execution of them is not”.

The same holds true in the startup world where 95% of startups fail, usually due to market failure stemming from botched execution.

While design thinking is indeed an incredibly powerful ideation and prototyping tool that I use with my team and with clients, it is but one of many pieces to the corporate innovation puzzle.

It alone won’t deliver any value beyond temporarily galvanizing employees and delivering some chemical reactions.

The Stars must Align

To get corporate, or any innovation right for that matter, the stars must align, and that includes:

Buyer behaviour can be influenced not only by function and price, but by factors such as switching costs, seller brand and reputation, budget, timing, internal politics, form, customer support, compatibility, social proof, security and privacy and existing relationships. You could have the ‘best idea’ in the world but if just one facet of your business model is not quite right then it might very well be the difference between success and failure. This is where approaches such as Steve Blank’s Customer Discovery method and the Lean Startup come into play. But in order to practice such approaches, the environment must support it, as we’ll learn later.

You can plug design thinking into any organisational context but what becomes very apparent is that in order for innovation to flourish at a large company and for ideas to go from zero to one, the underlying environment must be supportive.

A perfect example of this is General Electric.

The company hired Eric Ries, author of the lean startup philosophy, to train 5,000 middle managers in how to practice lean startup.

However, once the middle managers returned to their domiciled business units, do you think they could apply the lean startup? Of course not, because the business units had been set up to deliver, not to discover.

They had a perfectionist six sigma culture, an attitude of being the ‘smartest people’ in the room and that the customer didn’t know what’s best for them. The new product investment (NPI) process required the completion of massive business cases that asked questions such as market size and projected ROI - something you can’t reliably predict when it comes to disruptive innovation and you’re operating under conditions of extreme uncertainty.

It wasn’t until the organisation changed the environment by introducing a new belief system and processes that support acting on these beliefs, that the company’s industrial division decreased time to market validation for new ideas by up to 80%.

Learning: Get the environment and culture right first.

I had the pleasure of interviewing Tim Harford on Future Squared recently and he shared an insight from his new book Messy: The Power of Disorder to Transform our Lives. He told the tale of Building 20, an old plywood, cinderblock and asbestos ridden building at the Massachusetts Institute of Technology (MIT) in Boston which for many decades lay discarded by the University. It was however where student hobbyists, odd projects and basically anything that “didn’t matter” to the University came together.

It’s where cross-disciplinary students came together to share ideas and throw things at the wall and see what stuck.

It’s where they were given control to do more or less whatever they wanted.

So what kind of stuff that didn’t matter were they working on?

Noam Chomsky also revolutionised linguistics at Building 20. And this is only scratching the surface.

The environment you create (or in MIT’s case, neglect to create) can have unintended consequences on behaviours and outcomes.

Learning: Give people control to do stuff that “doesn’t matter”

To further demonstrate the unintended consequences of environment, take urbanisation.

While urbanisation may make sense from an economic development standpoint, it does change our inner city landscapes from terrace homes to large apartment blocks and multi-unit dwellings which means less garages and more noise restrictions.

The unintended consequence? The death of the rock band, as property journalist Andrew Street pointed out.

You’re now far more likely to find rock bands in the middle and outer suburbs, such as Thy Art is Murder (Sydney’s western suburbs) and Elm Street (Melbourne’s western suburbs) while in the city and inner ‘burbs you are far more likely to find unplugged artists and electronic acts such as Flume who can practice in the comfort of their own bedrooms with headphones on.

So what are your organisation’s noise restrictions?

Having had the privilege of interviewing countless thought leaders on innovation and creativity on Future Squared, the podcast is almost littered with examples of guests reiterating the point that environment is key.

Whether it was Jamie Wheal from the Flow Genome Project concluding that creativity is a state of mind, not a skill and that that state of mind can be cultivated by changing the environment; whether it was Angela Maiers saying that schools can prepare children to become more entrepreneurial not by teaching them the how but by creating environments that allow entrepreneurial behaviours to flourish; or Niel Robertson who said that the reason why Boulder, Colorado (population: 103,000) punches above its weight when it comes to startups and venture  capital is because of a #givefirst value system and the close proximity of entrepreneurs, investors and other players resulting in chance cafe collaborations, greater serendipity and as Steve Jobs put it, more connecting the dots.

So what kind of behaviours is your environment intentionally or inadvertently encouraging?

Is it supporting both ideation and execution?

Do your processes amount to noise restrictions or are you giving your employees the equivalent of a 100 watt Marshall amp and the freedom to go all Spinal Tap, crank it to 11 and come up with and test some crazy ideas?

After all, as former Future Squared guest and founder of the X-Prize, Peter Diamandis says, “the day before something was a breakthrough it was a crazy idea”.

10 tactics for testing ideas (under $100) for corporate innovators

Discover ten tactics you can quickly implement to test ideas before scaling - for less than $100.